All Collections
Update
FAQs
Why hasn't one, or some, of the passes updated?

Why hasn't one, or some, of the passes updated?

Understand how push notifications are delivered

When you change a value in one, or many, of the fields in a pass, or a pass template, PassKit updates the corresponding Pass record(s) almost instantly. The pass record(s) in your PassKit account database is thus updated.

To get the actual pass(es) updated in the wallet app, PassKit then delivers the update to the corresponding pass(es) in Apple Wallet and Google Wallet.

In most cases the update to the pass will appear 'instantaneously', but there are instances where updates can take some time, or rarely an update will not appear. Rest assured that the Pass record is updated in your PassKit account, but occasionally (fortunately rarely) the pass in your customers' phone may be out of sync.

Apple and Google Wallet use different technologies to update the pass as detailed below.

The following is a simplified, non-technical, summary of how Apple Wallet passes are updated; sometimes referred to as the 5 way handshake. 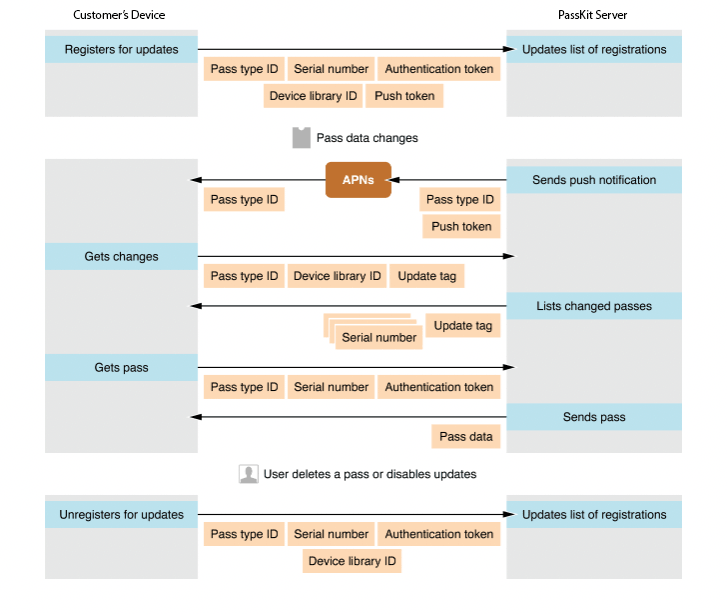 The update process uses the following pieces of information:

Apple officially describe their push (APNS) technology as “Best Effort”. This means that every effort will be made to deliver a push notification, but there is no guarantee it will arrive.

There are a broad range of factors that could prevent a push notification from reaching a device and the majority of these are outside the control of Apple or PassKit.

Push notifications tend to be more reliable over cellular than wifi connections, since NAT and firewalls can often prevent a push package from reaching a device.